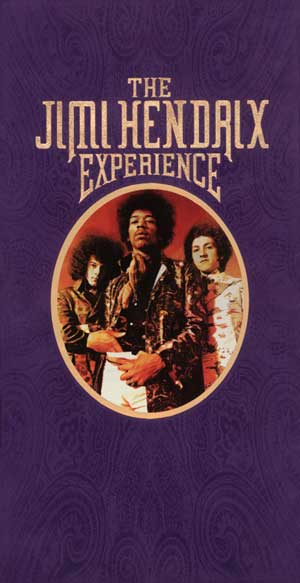 The Jimi Hendrix Experience Box Set is a four-disc compilation featuring a total of 46 tracks. This collection includes alternate takes of popular and well-known Hendrix tracks, live performances, and some other oddities and rarities. To say that it includes never-before-heard material would be a little misleading.

One of the cool things about this box set is the packaging. Fittingly, they used purple velvet on the outer cover, giving it a luxurious esthetic. In addition to the four CDs, they also included a 79-page booklet, which features an introductory essay on Jimi’s short but impactful career, and production details on each track (apparently later releases also included a 30-minute DVD, which sadly, I did not get). It’s clear that they did take the time to make this an appealing product on a visual and tactile level.

Would I call it the ultimate Jimi Hendrix collection? No, I don’t think so. While hardcore fans will probably get a great deal of enjoyment out it, the casual fan probably won’t share that same level of appreciation for what is essentially a collection of rough cuts and demos. This compilation is more of a nuts-and-bolts and odds-and-ends collection, and doesn’t claim to be a comprehensive catalogue of Hendrix’s career (and it’s not).

It can be rather enlightening to hear previous and unreleased takes of popular Hendrix songs, but you also have to wonder if Hendrix would have wanted this material in the hands of his fans if he was still alive. It begs the question, “Is there nothing sacred about the original recordings, the way they were released, the way they were meant to be heard?” I think Hendrix himself would have echoed these sentiments, embarassed.

Apparently there is more of the same material they are thinking of releasing to the public, but what’s the point in hearing every take leading up to the final rendition of “Purple Haze” or any other song? What’s the point in releasing material we’ve heard before, only less refined? It’s a fantastic notion that there are still Hendrix rarities that few people have heard, but after a point you only get diminishing returns.

In conclusion, students of music and the guitar are sure to have more appreciation for this box set than the average fan. The run-of-the-mill fan might enjoy a couple of listens through, but I can’t imagine it standing up to repeated listens. It’s a cool collectible that will end up sitting on your shelf.