Reflecting on My 3 Theme Words from 2016

Goal setting can be a drag. New year’s resolutions are hum-drum.

But each year, like my friend Chris Brogan (he gave me a shout-out on one of his podcast episodes last year, so that’s enough for me to call him a friend), I choose three theme words to define the year to follow.

This is a practice that’s fast becoming a habit, as it’s something I started doing in 2015. And it certainly isn’t hard to do, but you might be amazed at the results if you try it for yourself.

If you don’t know anything about achieving flow state, have a look at this article via zen habits: 9 Steps to Achieving Flow (and Happiness) in Your Work.

“Flow” is a state you achieve when you are fully engrossed in the work you’re doing. I tend to experience it most when I’m feeling good (not tired), and when I have a bit of background noise (such as at a café). Sometimes, I find flow at the magazine racks as well (no, nothing weird).

I don’t necessarily know why, but at least I know my triggers. What are yours?

My goal was to spend more time in my flow state in 2016. Did I achieve this?

I’m not certain that I did, and this was mostly an issue of energy. I felt tired a lot of the time, especially coming off an intense year in 2015. And I didn’t really change my work life, routine and habits until the summer.

But the good news is this – I’m beginning to reclaim my energy. I will have to talk more about how in the future. 2017 could be a great year for more flow.

I’m having flashbacks to 2009 as I think about everything I created in 2016. In 2009, I launched my original music industry podcast, a YouTube channel, and various other blogs and websites.

I’ve already shared about the many things I achieved in 2016 (as well as what my mistakes were), so there’s no need to recap here.

Create I did. Moving forward, I think my goal will be to create with purpose.

We’ve all heard it before – productivity isn’t just about efficiency. We tend to mistake the two. I know I do at times.

And part of making everything work will mean delegating more work and working with more contractors in 2017.

And it took a while to get there. But as you can see from posts like What is Bandcamp?, I’m beginning to cater more to the content you want.

So, on that level I feel like I succeeded.

But I also feel like I failed, because I’ve been doing less and less outreach work. Interacting with people on social media is part of how I’ve gotten to where I’m at today – I would have never built the connections I have, or have the work I have if not for what I did.

But going back to how I did things back in 2012/2013 probably isn’t realistic right now, despite how much I would love to be talking to more friends and industry people (as well as making new friends).

This is something for me to reflect on more.

I debated whether to define theme words for this year, because I didn’t refer to the ones I set last year very often. But ultimately, I decided it was a useful practice to continue. Here are my three theme words for 2017:

I even put these words up on my wall so they would subconsciously influence my decisions throughout the year: 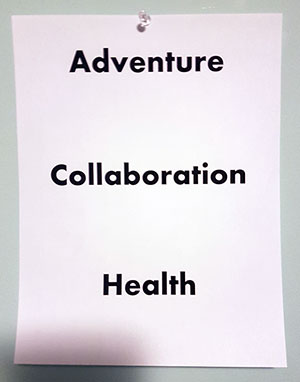 What are your three words for 2017? Do you think this would be a better process than making new year’s resolutions?

Let me know in the comments below.