Productivity in Music – Does it Matter?

“Productivity” feels like such a technical term… Especially when we’re talking about something as creative as music.

We could just as easily say “getting more done in less time” or “making the best use of our time.”

But that still feels a little aimless to me.

If the goal is to “get a lot done” then the above is more than adequate. And I can tell you from my own experience that if you’re determined to get a lot done, you will.

Getting the right things done is what matters, and the sooner you can admit that Facebook isn’t going to increase the quality of your life (nor are you going to regret not spending more time on social media on your deathbed), the better.

Why Productivity in Music?

I’m not going to sit here and tell you that productivity isn’t important. Quite the opposite.

Imagine being able to write, record, and release more music.

If you did that, could you create more opportunities for yourself (such as licensing opportunities), increase your fan base, and generate more revenue?

Imagine having a greater impact on your fans, lifting broken spirits, helping people out of depression, saving lives…

Do you feel like that would be a life well lived?

Imagine dying with the best song out of you.

If you could “die empty” as author Todd Henry so eloquently said, do you think greater joy and fulfillment would be available?

That’s what’s possible when we focus on the right things rather than just doing a lot of things. There is a difference, and it does matter.

What Everybody Really Wants is Effectiveness

As a recovering productivity fiend, I can tell you honestly, productivity isn’t what you want. Click To Tweet

I understand that you want to accomplish more.

Maybe you want to achieve the things I just talked about (releasing more music, changing the lives of your fans, leaving this world having squeezed every bit of creativity out of yourself…).

Or maybe like me you want to travel/tour the world, grow into the best version of yourself, inspire and serve people everywhere you go with everything you do.

Consider for yourself what you would think of as your goal (your ultimate goal – the thing you don’t want to leave this world without having achieved), and more importantly, what you would consider your “why”.

Well, unless you prioritize, I guarantee you’re never going to get there.

So, productivity isn’t going to get you there. It’s only going to overload your system with adrenaline, leading to bouts with anxiety and depression, something us artistic types are already prone to. And that can lead to illness.

I recently published a podcast episode titled A Level Above Productivity & Time Management.

You can listen to it here:

It’s basically a rant, but the point is that it’s not about the hustle and grind.

Sometimes you might need to sacrifice sleep, work long hours, or take a red eye flight. When I’m in “launch” mode, I always make some sacrifices.

But the way to get your best work done is…

You can read this story in detail if you wish. Here I’m only going to be touching on the key details…

You’ve probably heard of Warren Buffett. He’s one of the wealthiest investors alive.

Mike Flint was Buffet’s personal airplane pilot. He did this for 10 years, so as you can imagine, Flint and Buffett got to know each other quite well.

Flint wanted absolute clarity on how he could achieve more. Buffett gave him an exercise.

The first step was to write down his top 25 career goals.

The next step was to find and circle his top five goals.

As you can imagine, all 25 goals were incredibly important to Flint. He even told Buffett he would spend most of his time on his top five goals while working on the other 20 goals here and there when openings were available.

But Buffett told Flint to focus all his time, energy, and resources on his top five goals and to ignore the other 20. Buffett added emphasis by saying the B list was to be avoided at all costs until he had achieved his top five!

What do You Want to Achieve?

On day one, I was asked a series of questions to help me gain clarity on my purpose. This question helped me identify my priorities with exacting precision:

If I died today, what dreams would I have left unfulfilled?

These were my answers:

Those, apparently, are my top five goals. I didn’t even know until I went through this exercise!

All other goals might be important but aren’t as important as these. And I admit I’m still making that switch from the whole list to just the A list. But at least I know what my A list is.

Productivity is of No Use to You…

But if you want to…

Then you also need a structure. I can’t downplay the importance of tactics in getting things done.

The structure is what allows you to remain focused, stay on track, and get the right things done instead of wasting time you’ll never get back.

That’s why I wrote The Music Entrepreneur Code, and a large chunk of that book is dedicated to productivity.

If you want to discover the practical and easily applicable steps you can follow to achieve peak productivity, click here to learn more. 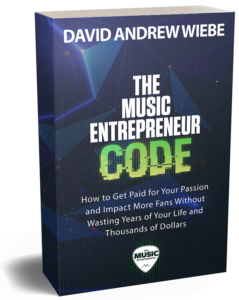